So we were suspended from Twitter within a week of setting up the account.  After ‘appealing’, we received the following message:

Please do not respond to this email as replies and new appeals for this account will not be monitored.

The content of the @deptfordresists account consisted of tweets against the Tidemill development, support for Tidemill demo callouts, criticism of Lewisham Labour elite councillors Joe Dromey, Paul Maslin, Paul Bell and Mayor Damien Egan (no bad scary language or personal info used, though they were called a bunch of parasites), and criticism of the classist Public Space Protection Order in place across Lewisham. And of course our blog posts were shared. Apparently all this constitutes some kind of repeat violation of unspecified Twitter rules. A number of the tweets drew attention to these councillors’ role in the destruction of Deptford, one pointed out the hypocrisy of Dromey speaking about inequality as part of his cushy job for the Institute for Public Policy Research whilst vocally supporting the eviction of council tenants in his ward. Given his self-victimising response to the criticism the Tidemill campaign has levelled at him so far and the protests that have taken place, we can only assume that he or other councillors appealed to Twitter to cushion him from the harsh truth being voiced by his constituents.

All we can say is good riddance to Twitter and Facebook. The more they try to police even remotely subversive content on their platforms, the more people are gonna get pissed off and abandon them – which can only be a good thing for mental health and society as a whole!

Posted in General | Comments Off on Booted off Twitter – within a week!

Can we stop debating with Lewisham councillors?!

Since the angry protests against the destruction of Tidemill and Reginald House on Tuesday night, some local politicians such as Joe Dromey, Paul Maslin, Paul Bell and Chris Barnham have been working overtime on the propaganda campaign.

Their main claims, many of them worn out old tropes designed to cause division in the campaign, are as follows:

They argue that the protestors were illegtimate because:

Unfortunately, many campaigners have been engaging in debate with these fuckers on social media, with some distancing themselves from the actions that took place later on Tuesday evening, or condemning the ‘violence’. In particular, many people have unfortunately got sucked into discussions about masks, claiming that actually, very few people there had their faces covered.

WHO CARES WHAT WE WEAR ON DEMOS?! THIS IS ALL A DISTRACTION! DO NOT LET THE POLITICIANS DIVIDE US!

We have every right to protect our anonymity from the cop body cams, CCTV cameras and journalists, and it is often wise to do so. In ‘Why Cover up? The case for protest anonymity’, Netpol argues,

“It is important to remember that public order intelligence gathering by the police is carried out with a deliberate purpose: what some criminologists have called ‘strategic advantage’ and ‘strategic incapacitation’.1 Intelligence is used to understand the structures, sustainability and strengths of protest groups, in order to develop ways to undermine them.

This is why, in incidents of harassment we have repeatedly highlighted, so-called ‘domestic extremists’ have faced visits or letters to their homes. This is why Forward Intelligence Team officers have been known to follow individuals for hours, even days, sometimes when they are with their children or families and even to their workplace. This overt intelligence gathering is undoubtedly also used to identify possible targets for undercover policing and to help ’embed’ undercover officers.”

Those who condemn others who conceal their faces for very valid reasons fail to recognise how they are acting as useful tools of the politicians in shoring up the narrative of good vs. bad protestor, keeping protests inneffectual, and keeping us divided.

DON’T TAKE THE BAIT! WEAR WHAT YOU WANT! LET’S STAY FOCUSED & GET OUT ON THE STREETS! 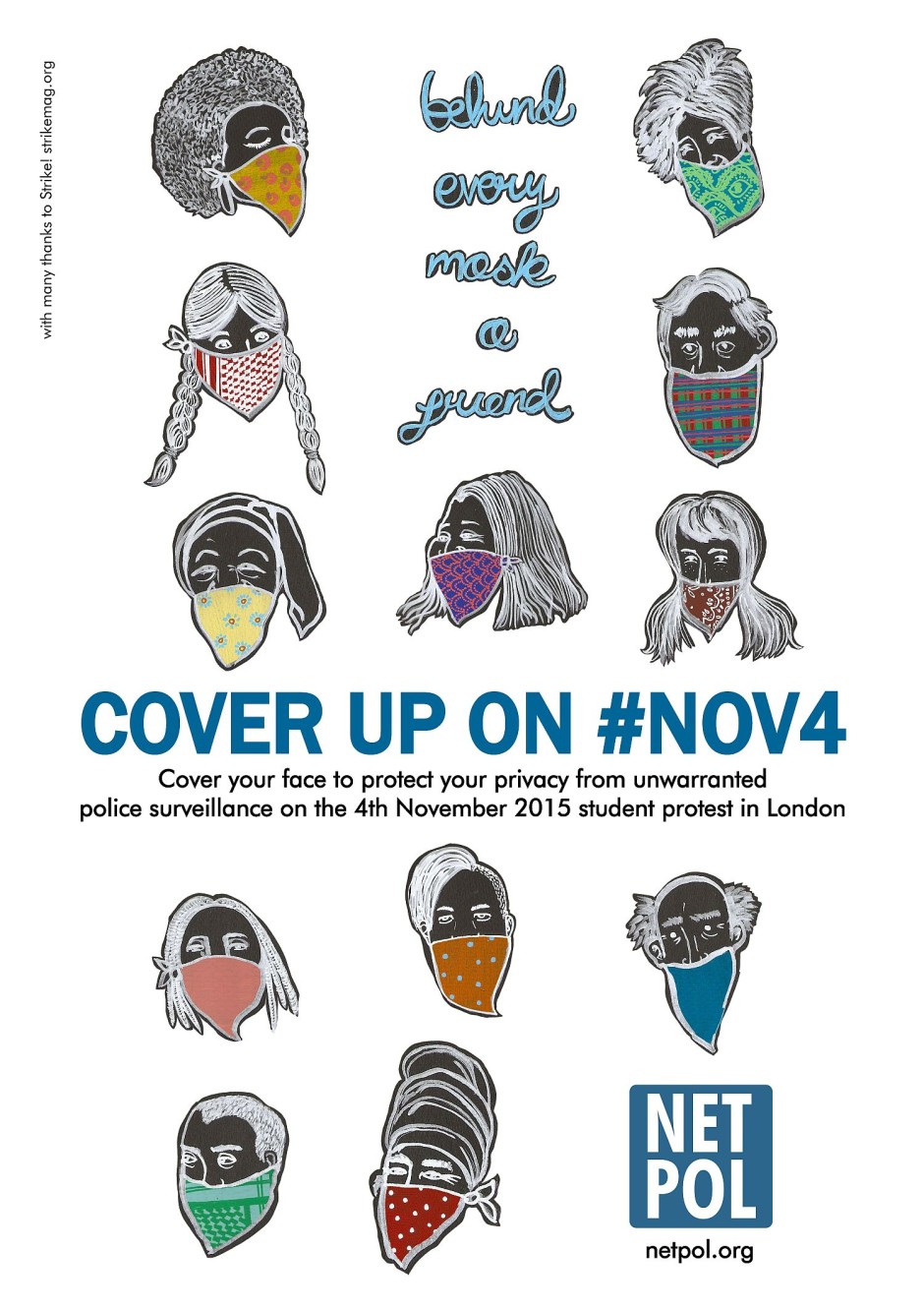 Posted in General | Comments Off on Can we stop debating with Lewisham councillors?! 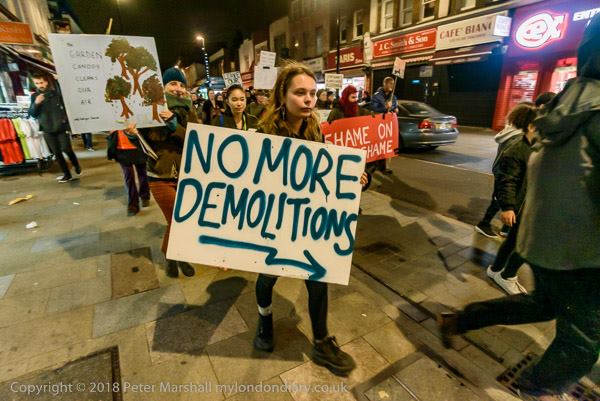 Report from events outside the New Cross Assembly

What we saw last night was real people power in action, as we continue to fight against the destruction of Tidemill community wildlife garden in Deptford and the eviction of the adjacent flats at Reginald House to make way for more flats. This follows last week’s eviction of the Tidemill occuption by hordes of cops and bailiffs, which was strongly resisted throughout the day. The area now remains a fortified zone, permanently surrounded by dozens of bailiffs.

At 7pm on Tuesday evening, around 40 people, furious about the planned destruction of yet another green space & eviction of yet more council flats, gathered to protest at the Lewisham Mayor and councillors who were due to speak at the New Cross Assembly. Despite there being plenty of empty seats in the room, us common riff-raff were shut out and prevented from participating in their ‘democratic processes’.

So instead we made our feelings heard from the outside, banging on the gates and makeshift drums and eventually making it right up close to the half-open windows, through which cries of “stop demolition”, “careerist parasites!” and “no one believes your lies!”, and plenty of cheers of support for the angry locals inside the event were expressed.

Councillor Joe Dromey, a particularly smug-faced, upper-class advocate of the destruction (and son of Harriet Harman no less) was the first politico to leave the event. As he did so, he was mobbed by the fiery crowd. He couldn’t face his constituents and eventually opted to be bungled into a police van to drive him home.

Meanwhile, Lewisham Mayor Damien Egan’s attempts to make a quiet getaway were foiled, as the crowd spotted him and encircled his car. Some people lay passively in the road while others stood around the car. The message was made very clear to the young mayor: drop the development, hands off tidemill. The cops waded in and, without giving any formal warnings to leave, set about dragging people out the road and violently chucking them about left, right and centre. Several of them appeared completely unhinged, charging and punching people in the face.

For about 5-10 minutes, the mayor’s car was unable to leave its parking space as the scuffles with the cops continued. Eventually, enough violence was used by the police to clear the path, enabling the mayor and his colleague to begin driving slowly through the backstreets of Deptford. But at every turn, brave and passionate people with little concern for their own safety, got back into the road, or tried to make barricades with bins. This was it: Tidemill had become a symbol of every dodgy development project in the area, of lie after lie by self-serving and patronising local politicians, of destruction of our neighbourhood and the planet. People really have had enough.

To get the car through, the police had to bring in heavy reinforcements and dogs. Met police Commissioner Cressida Dick even made her way down by the end of it and was sighted talking to the chief cop on the scene. At one point, crazed skinhead cop #1393 inexplicably made a beeline for a harmless and entirely peaceful young brown man who was walking alone about 10 metres ahead. This psychopath threw himself on this poor lad, chucked him to the floor and proceeded to asphyxiate the totally passive guy, digging his thumbs into pressure-points on his neck so that his face was rammed up against the concrete, and knelt on his neck for extra measure. It looked like he was going to kill the guy, and the many people who witnessed it said so. Given that there were lots of people who had been much closer to Egan’s car, this was yet another overt case of pure racism, premeditated assault, and outright police brutality. This took people’s attention away from the mayor’s car which was then able to get away onto New Cross Road at around 10pm. The guy was arrested and taken to Lewisham police station, where a group went to support him.

The racist assault & arrest by the cops aside, the night was a really promising one. It was fantastic to see impassioned people taking to the streets again, uncompromisingly defending our neighbourhood from corporate parasites, fighting ecocidal destruction, and refusing to play to their silly game of ineffectual quiet protest.

Later that night, Councillors Joe Dromey and Paul Bell pulled out the inevitable tired old tropes of ‘legitimate’ vs. ‘illegitimate’ protestors, masked vs. unmasked, young vs. old, ‘native residents’ vs. interlopers, poor vs. middle class & respectable -i.e. those naive enough to continue to play along with their sham consultations and faux democratic processes.

No-one but your suited cronies buy it. We’ve gone right through the petitions, the utterly futile ‘debate’ in your forums, the legal processes and the passive protests. And Lewisham Council has run roughshod over all of them.

There’s only so much bullshit that people will take.

DO NOT LET THE POLITICIANS DIVIDE US!

NO HOMES ON A DEAD PLANET!!! 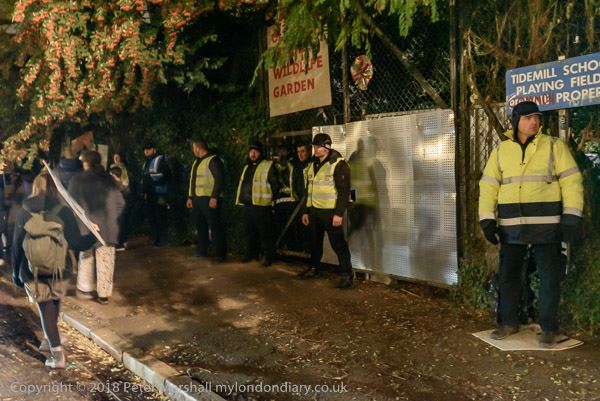 The demo started at Tidemill and marched past the garden, which remains surrounded by bailiffs 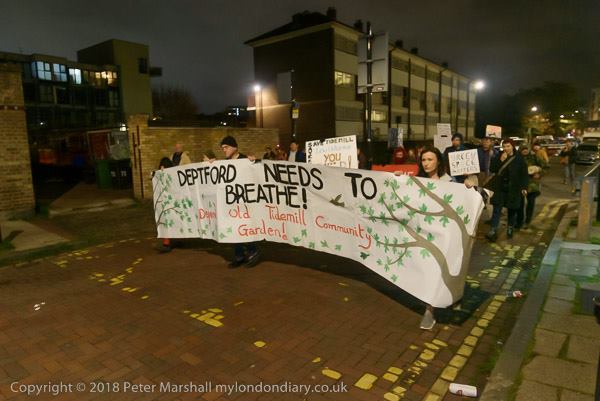 Marching to the New Cross Assembly 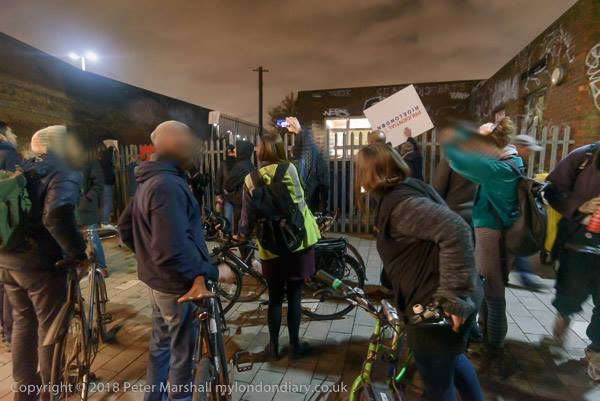